Light is crucial to life on Earth. Heat is transferred from the sun, in the form of infrared radiation, to warm the planet and to drive the climate system, whilst photosynthesis, the process which makes atmospheric oxygen and from which plants make sugars, relies on visible light to work.

Light is also used extensively in technological applications – for example solar panels, radio signals or medical X-rays – and in science, where is it used to understand the world around us.

Diamond Light Source, which sits on the Harwell Campus in South Oxfordshire, is home to the brightest light in the UK. Diamond allows scientists to understand the nature of the world at a tiny scale, looking at the atoms and molecules that make up our world. 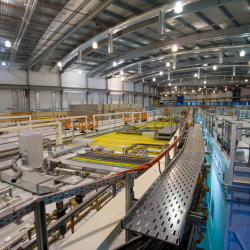 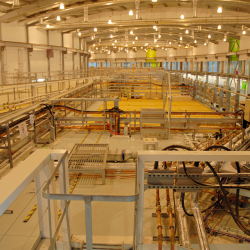 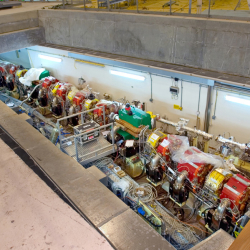 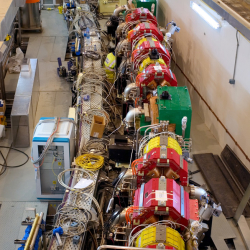 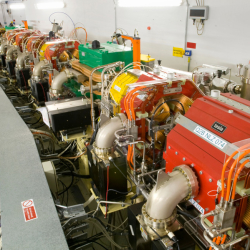 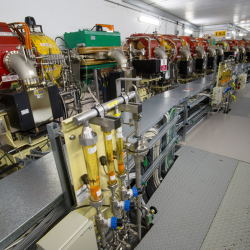 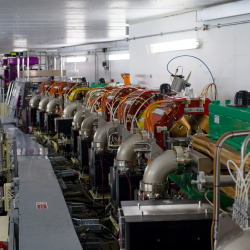 From solving the structure of proteins in our body to finding out the composition of comet dust, Diamond is able to shed light on all sorts of problems.

A bright and shining light

The light that Diamond generates is 10 billion times brighter than the sun. We make such bright light by accelerating electrons up to nearly the speed of light by using a type of particle accelerator called a synchrotron.
A synchrotron is a ring of magnets which keep particles (electrons in our case) orbiting round and round inside a vacuum tube at these massive speeds. At Diamond the synchrotron is about 170 m in diameter and occupies a large building about the size of six football pitches!

But how do we get our electrons up to such high speeds? Diamond is actually made up from three particle accelerators. A 35 m long linear accelerator (LinAc) takes electrons from a standing start and accelerates them using a combination of electric and magnetic fields to 99.9% of the speed of light; but this isn’t fast enough for our needs!

From the LinAc, the electrons are injected into a 70 m diameter booster synchrotron, which gives them a further push up to 99.99999% the speed of light, using only magnetic fields. The acceleration from standing start to light speed is very fast, needing only a matter of seconds. Once up to speed, the electrons are injected into the 170 m diameter storage ring synchrotron.

‘Ring’ is a bit of a misnomer – at Diamond, our ring is actually a 48-sided polygon. At each ‘corner’ of the ring is a very powerful bending magnet, which forces the electrons to change direction from one straight section to the next.

As the electrons go around a corner they accelerate – you feel the same acceleration when you go round a corner fast in a car – and as they do so, they release a wide spectrum of light from infrared, through visible and ultra-violet to X-rays. This synchrotron radiation is the light we use in our experiments.

A diverse range of experiments are performed at Diamond, from understanding how drugs interact with the body to developing new batteries for mobile phones and understanding how historical artefacts were made. Many of the techniques rely on scientists being able to understand the structure of materials at an atomic scale.

To ‘see’ atoms, we shine X-rays through crystals. Because the atoms in a crystal are so close together, when X-rays pass between them they are diffracted – that is they spread out like waves entering a harbour from the sea – and due to the regular repeating pattern of the crystal, different rays overlap with each other.

This produces a pattern of spots which we can pick up with a special type of camera: an X-ray detector. The spots are not the atoms however; to ‘see’ them we perform some clever maths on the positions and brightnesses of each spot, the result of which gives us a 3d map of the atoms in the structure, which scientists can interpret.

The development of the recently reported Alzheimer’s treatment, solanezumab, relied on just this technique. The atomic structure of a protein associated with Alzheimer’s was determined using a synchrotron light source.

Once scientists could see where interaction sites on the protein were and what shape they have, they were then able to develop a drug with the right shape to change the behaviour of the protein and then block the progress of the disease.

With the extremely bright light that Diamond produces, ever smaller crystals can be investigated, increasing the range of compounds which can be analysed. It’s even possible to see atomic scale processes taking place in near real time.

Diamond facilitates a huge range of science and provides a place where scientists and engineers from many different backgrounds can work together, leading to new understanding of the world around us and exciting new technologies. All through the use of something as simple as light.

A year of light

The importance of the science of light and its application to both the natural world and also to modern society is being internationally recognised this year by UNESCO, who have designated 2015 the International Year of Light (IYL2015).
To celebrate this, the exhibition “Diamond Light Source: Light For Science” will show some of the technologies involved in constructing and running the synchrotron at Diamond and explain how such bright light can be generated.

We’ll explore some of the most intriguing and important results to emerge from the facility since it opened in 2007, as well as getting a glimpse of on-going research. Visitors will also get a taste of the capabilities still being developed on this world class, national site.

On Saturday 5 September, Dr Michael Wharmby will be on hand to answer your questions about Diamond, the machine itself and the science that we do there.

Michael will also be happy to answer any questions you have from his talk, “Brought to Light”, and you will also be able to try out for yourself some of the demonstrations from that talk. There will also be the chance to collect a diffraction pattern using Diamond’s Lego beamline and understand how we can use this to ‘see’ atoms.

The exhibition ‘Diamond Light Source: Light For Science’ is at the Nautical School, Stromness and open through the Festival every day except Sunday. 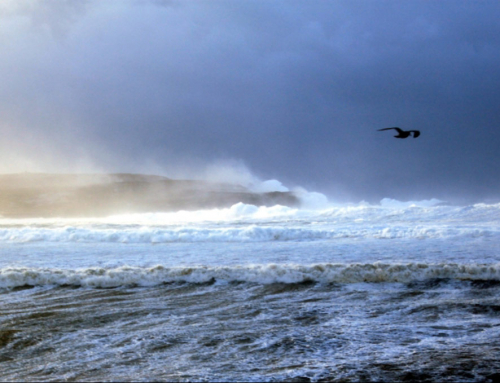 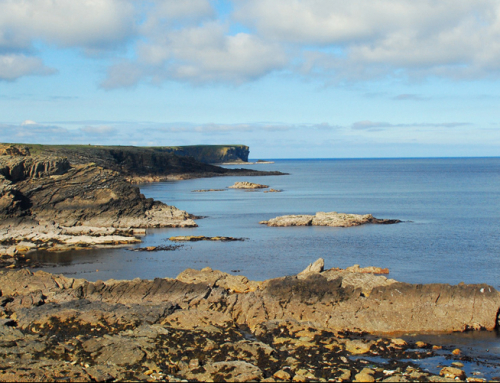 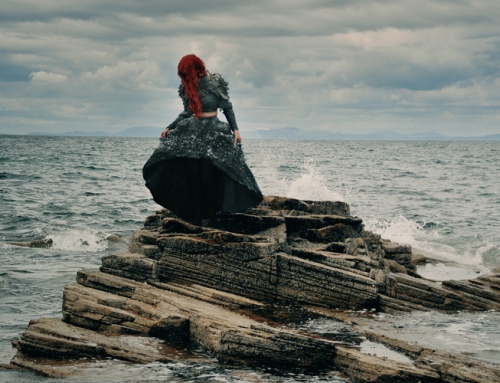 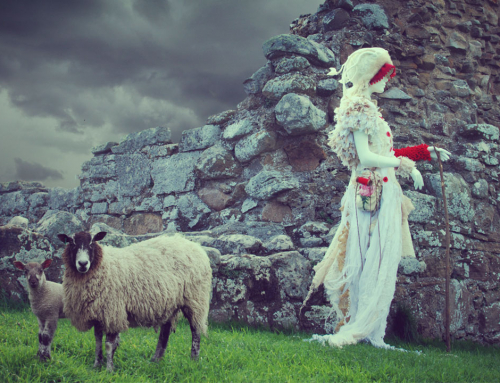 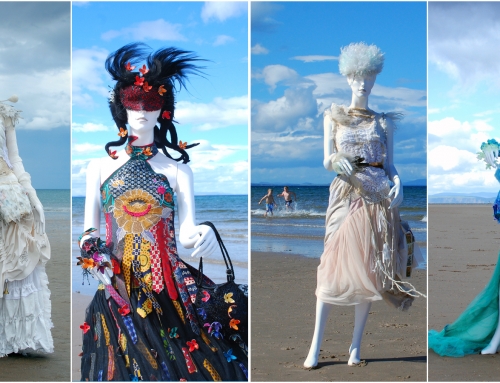