THE LOSS OF HMS HOOD

On May 21st it will be exactly 80 years since HMS sailed from Scapa Flow on her final voyage. Three days later she was sunk by the Bismarck in a sequence of events that led to the end of the great German battleship as well. The Hood was so renowned that her loss was a national shock, and story of her life, from construction to the final days, will be told in an programme of events by the group Another Orkney Production on 21-22 May for their annual ‘Celebrating Scapa Flow’. Moya McDonald of AOP outlines the plans and the background.

Shortly before midnight on 21 May 1941 HMS Hood weighed anchor and sailed out of Scapa Flow through Hoxa Sound to patrol the waters south of Iceland and prevent Germany’s largest battleship Bismarck from reaching the North Atlantic. Hood was accompanied by the newly commissioned battleship HMS Prince of Wales and six destroyers. 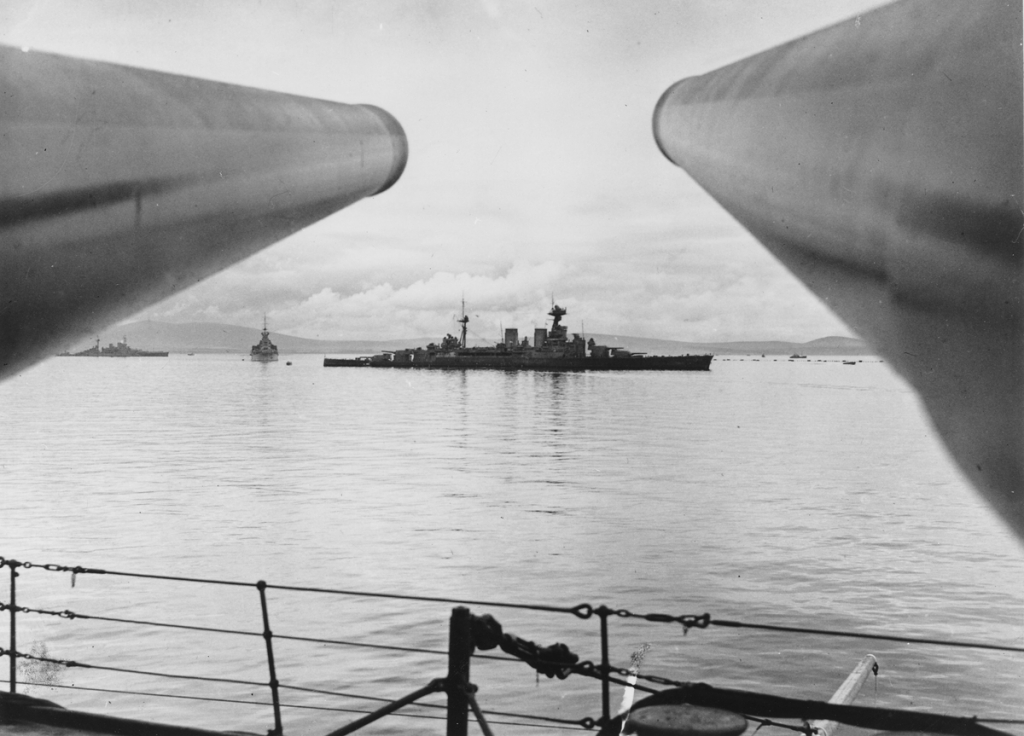 Launched in August 1918 and commissioned in May 1920, Hood was the largest battlecruiser ever built and the most famous ship in the Royal Navy. This was in part due to the ‘World’ Cruise which took place between November 1923 and September 1924 when, accompanied by HMS Repulse and a squadron of light cruisers, she visited many ports around the world.

In the early years of WW2 Hood was a frequent visitor to Scapa Flow.  By 1941 she was a veteran of 21 years, still the largest ship in the Royal Navy and badly in need of a refit.

By comparison, the battleship Bismarck, the largest ship in the German Navy, was of similar size but had been newly commissioned in August 1940. Her sheer size, speed, armour protection and weaponry made her a major threat to allied shipping.

When she arrived in Norway in May 1941 accompanied by the heavy cruiser Prinz Eugen, intelligence suggested she was heading for the North Atlantic.

The battle which took place on 24 May in the Denmark Strait, between Iceland and Greenland, resulted in HMS Hood sinking within minutes of being hit, with the loss of 1,415 of her crew of 1,418.

The Association’s chairman, Cdr William Sutherland, with Rob White, describes its work and how it was established in 1975 by a group of former crew members including two of the three survivors of the sinking. Members of the society include family members of sailors lost with the ship, veteran sailors and enthusiasts interested in naval history. New members are always welcome.

The Association’s website commemorates HMS Hood and her crew, providing details of all the ship’s technical specifications and history, with links to many photograph collections. There are memorial pages for all 1,415 men who were lost where information can be found out about each crew member.

2.00 – 3.00 pm
BUILDING HMS HOOD
Renowned maritime historian and author Ian Johnston tells the story of the ship’s construction at Clydebank, from receipt of the order in April 1916 to completion in January 1920, using photographs taken by the resident shipyard photographers, by courtesy of the National Records of Scotland.

3.30 – 4.30 pm
HMS HOOD TO AUSTRALIA
Naval historian Graeme Lunn gives an account of Hood’s visit to Australia as part of her world tour of 1923-4.

7.00 – 8.00 pm
ORKNEY’S ROLE IN THE HUNT FOR BISMARCK
Naval historian and author Cdr David Hobbs describes how the movement of ships in Scapa Flow was controlled; the events from Hood ’s departure up to her loss in the Denmark Strait, and the critical role played by 771 Naval Air Squadron and RNAS Hatston.

8. 15 – 9.15 pm
FILM: FOR YEARS UNSEEN
Filmmaker Rob White introduces his documentary telling the story of the recovery of HMS Hood’s ship’s bell (with thanks to Paul G. Allen) after many years’ hard work by renowned wreck finder David Mearns who first discovered the ship in 2001 for a Channel 4 series about the great battlecruiser. The title is derived from Lost Sailors, a book of poetry by Bee Kenchington, whose brother was lost with the Hood. Followed by an opportunity for questions and discussion with Rob White and David Mearns.

9.00 – 9.45 pm
DISCUSSION: FOR YEARS UNSEEN
An opportunity for questions and discussion with filmmaker Rob White and wreck finder David Mearns, looking back at the discovery of the ship and the making of the film, and then joined by the other speakers from the weekend to round off the story of the great battlecruiser.

9.45 – 9.55 pm
HMS HOOD: HISTORIC FOOTAGE
Historic footage of HMS Hood on the Clyde and at sea, painting a picture of the ship and her crew and some of the places that they visited, then moving on to underwater footage of the discovery of her wreck in the Denmark Strait in 2001.

Compiled and edited by Rob White. Presented as the closing element in the programme of events marking the 80th anniversary of HMS Hood’s final departure from Scapa Flow on March 21st 1941.

Captain Chris Smith, Regional Commander Royal Navy for Scotland and Northern Ireland, is a leading Naval expert on external engagement and advocacy, and event planning and execution. He has much experience of strategic planning,operational delivery and change management, and of working with inter-Governmental relationships within the devolved framework of Scotland. He is accountable to the Assistant Chief of Naval Staff for the delivery of all elements of Naval regional activity across Scotland and Northern Ireland. This includes engagement with the devolved administrations and influencing policy, and also responsibility for the organisation and support of multi-national warship visits to UK ports, and the Royal Navy’s contribution to UK resilience operations. He was appointed as an Aide-de-Camp to HM Queen January 2018. He has a lifelong passion for the outdoors, extolled through leadership and participation in volunteer activities and organisations. 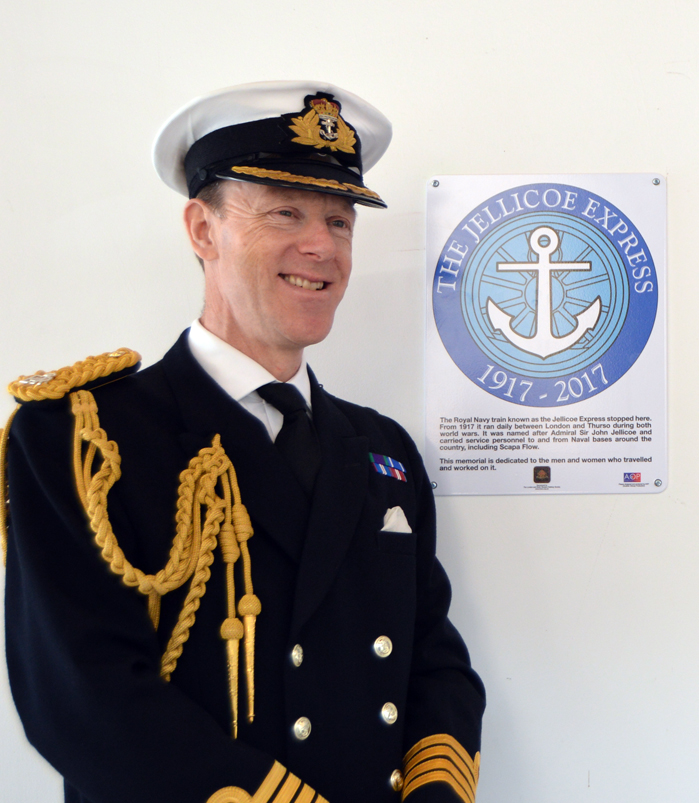 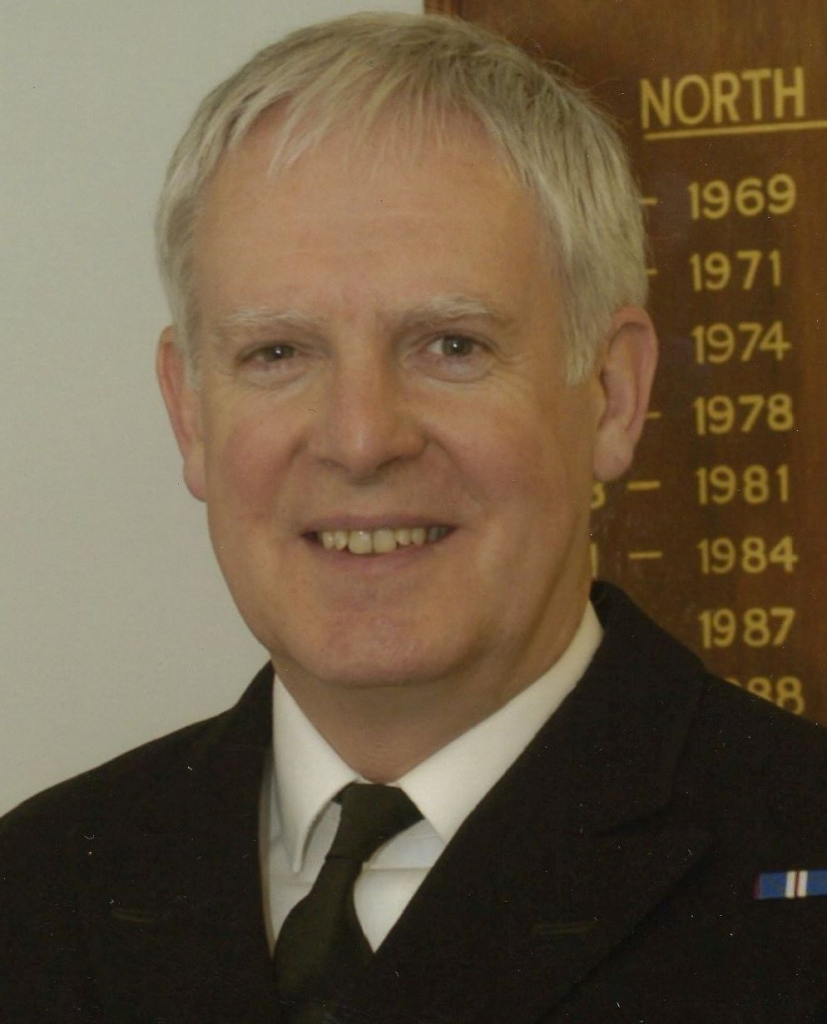 Cdr William Sutherland RN is chairman of the HMS Hood Association.William joined the Instructor Branch of the Royal Navy in 1981, following five years as a teacher. The first member of his family ever to join the ‘Senior Service’, he formed a youthful interest in the Royal Navy thanks to his interest – which proved enduring – in the career and sad ending of HMS Hood, so he feels that owes his career to Hood! He considers it to be an honour to be chairman of the Association which commemorates the ship and her men.  William’s service afloat included gaining his bridge watchkeeping certificate in the aircraft carrier HMS Illustrious, in which he visited Australia in 1986 to help celebrate 75 years of the RAN.  William’s RN service lasted very nearly 25 years, and in his later appointments he specialised in personnel management in the Ministry of Defence. 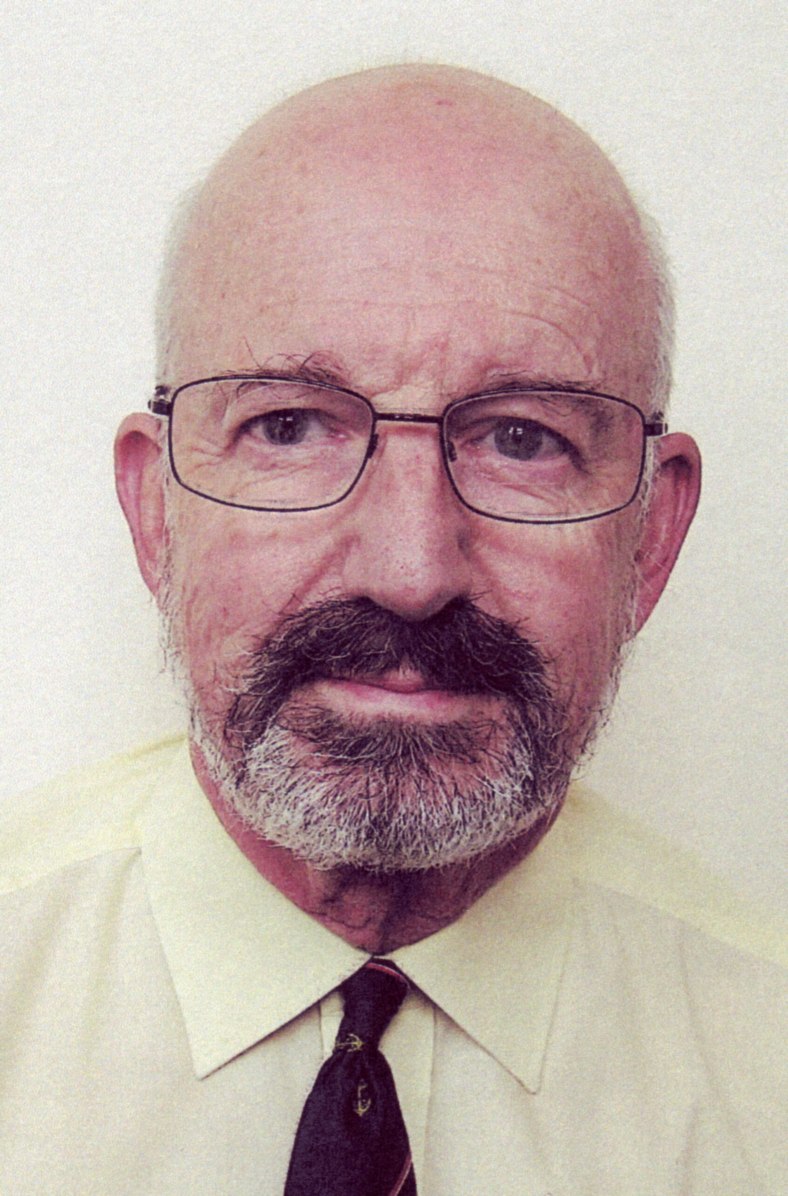 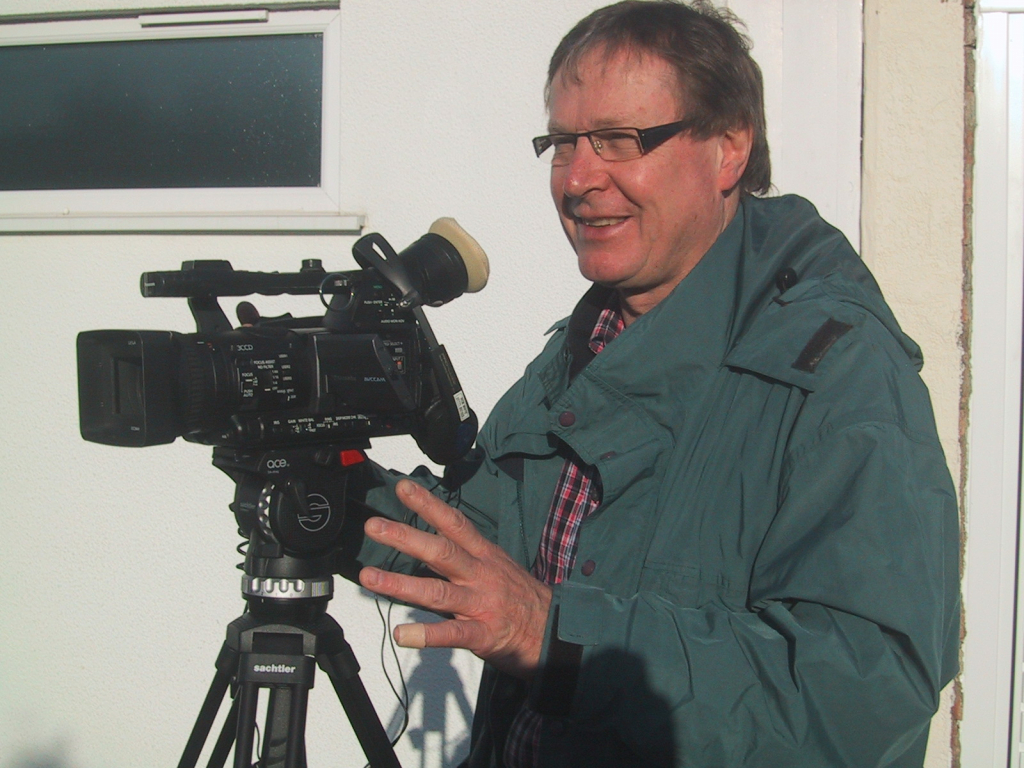 Rob White is a four-times award-winning radio and television producer and reporter with 30 years’ experience, having worked for BBC External Services, Radio 1’s Newsbeat, Radio 4’s Kaleidoscope, Breakfast Time, Newsnight, and Channel 4 News before moving into documentaries with ITN Factual. He then went on work as ITN’s Senior Science and Medical Producer, before leaving broadcast TV to set up Maritime Films UK, which works for clients ranging from Nautilus International to Britannia P & I insurers, The National Museum of the Royal Navy, and sea safety organisation CHIRP Maritime.

Rob is a Vice-president of the HMS Hood Association.  His documentaries as producer include four about HMS Hood: The Mighty Hood, Hunt for the Hood and the two-part The Battle of Hood and Bismarck, which included the discovery of the wreck. He also produced Total Structural Failure, about the hitherto unexplained loss of the bulk carrier Derbyshire in 1980, whose discovery by leading shipwreck hunter David Mearns led to new standards in bulk carrier construction.

Ian Johnston is a retired Deputy Director and Head of the Academic Programme at the Digital Design Studio at the Glasgow School of Art, as well as a maritime historian and an expert on Clyde-built ships. This is reflected in many of his books including A Shipyard at War, Beardmore Built, The Battleship Builders, Ships for a Nation – the History of John Brown’s Shipyard.  He was also co-author of Battleship Ramillies – a Final Salvo, the story of one of Royal Oak‘s sister ships. He featured in the BBC TV series Clydebuilt – the Ships that Made the Commonwealth: HMS Hood. 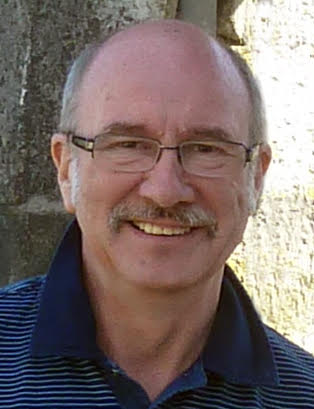 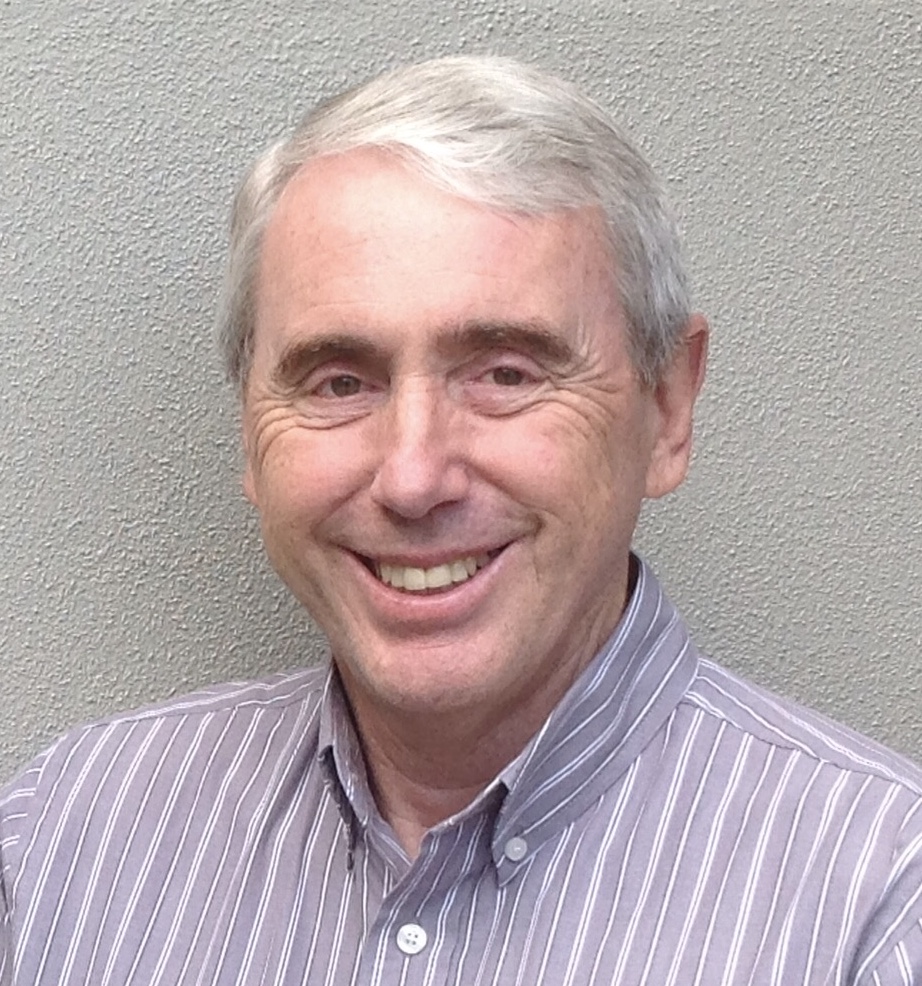 Graeme Lunn joined the Royal Australian Naval College in 1976. After time as a seaman officer in mine hunters, destroyers and an aircraft carrier he completed a pilot’s course and served in several squadrons and with a multi-national force in the Sinai. Leaving the RAN after exchange service as a Flight Commander with the RNZN, he joined British Airways where he is now a senior captain presently flying the Boeing 787 Dreamliner. He holds a Masters Degree in military history and writes on Australian naval history for the Seapower Centre and the University of New South Wales in Canberra.

David L. Mearns is a chartered marine scientist, award-winning author and expedition leader of deep ocean projects. He is one of the world’s most experienced and successful deep-sea shipwreck hunters, having located 26 major shipwrecks with an overall 90% success rate, and he has been awarded five Guinness World Records, including one for locating the deepest shipwreck ever found, at 5,762 metres. His most important discoveries along with HMS Hood range from the bulk carrier Derbyshire to the Portuguese East Indiaman Esmeralda from the 1502-3 fleet of Vasco ds Gama. 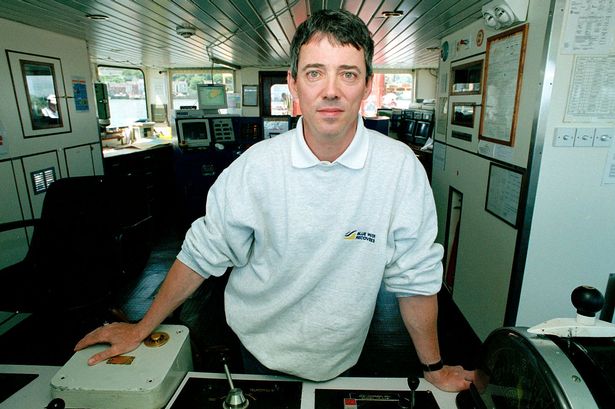