This year’s Festival will highlight the discovery of the year – indeed one of the great scientific discoveries of all time – gravitational waves.

Glasgow University has played a key role in developing the equipment that finally detected them, and one of the leading members of the Glasgow team, Prof. Martin Hendry, will tell the story.

The next challenge could be to find the mysterious dark matter which may hold together whirling galaxies. Prof. Alex Murphy of Edinburgh University has the latest news of the search. His colleague Prof. Arjun Berera describes the early universe in which the first particles condensed from the blazing sea of energy left by the Big Bang.

And now that the Higgs particle has been discovered, is that the end of the story – or are there hints of something further beyond? Dr Victoria Martin reports from CERN.

Medical research featured will include the story of a protein called p53 and the gene that codes for it. The protein protects our cells against cancer, by repairing DNA and killing damaged cells – but when it is itself harmed, our resistance is lowered.

The story of The Gene that Cracked the Cancer Code will be told by writer and broadcaster Sue Armstrong.

The link between genes and diet will be explored by Prof. Jun Wei of UHI’s Centre for Health Science. The interaction between the two, he says, plays a crucial role in various diseases, with gut bacteria forming a key link contributing to food tolerance and digestion.

Research on dolphin communication will be highlighted by Prof. Vincent Janik of St Andrews University. It’s now known that each dolphin develops its own unique signature whistle – functioning like a name. He’s shown that a wild bottlenose dolphin can learn the signatures of other dolphins – and then answer when it hears its own call made.

This year’s anniversaries include the start of Orkney’s herring industry, 200 years ago. Samuel Laing of Papdale commissioned boats to come north to Stronsay and seek herring – and after weeks of disappointment, in they came.

”Loaded they were with herrings of the finest quality,” he wrote. “The next season there were four hundred boats fitted out in Orkney.”

A Georgian afternoon tea will follow the talk at Skaill House.

John Grierson’s classic film documentary about the North Sea herring industry, Drifters, will be shown at West Side Cinema in Stromness. Made in 1929, it follows trawlermen through their daily routines and is silent – so beatboxer and composer Jason Singh will perform a live vocal score, combining voice effects and sound technology.

In another Stromness event, this time in the Pier Arts Centre, photographs of Orkney fishermen today will be shown by artist Joanne Coates, helped by several local fishermen and scallop researcher Hannah Fennell.

James Petrie Chalmers, born 150 years ago in Tankerness, laid down standards of quality and safety for the new cinema industry by starting the first-ever film trade journal, Moving Picture World. His story will be told by Moya McDonald, with an early film programme as featured in the magazine.

A great rescue took place 100 years ago on 30 August. Ernest Shackleton’s men were trapped in the bleakness of Elephant Island after their ship Endurance was crushed by ice. He set off with five of them in a small boat, to seek help in South Georgia. It was a journey through icy storms and mountainous seas, and then a climb over the mountains to the Norwegian whaling base on the far side. Polar historian Dr Maria Pia Casarini tells the dramatic story.

Earlier that same year, some of the men in the naval battle of Jutland had themselves come from an Antarctic voyage – the attempt of the Terra Nova to bring supplies to the Scott expedition. Ice fatally delayed them, and writer Anne Strathie follows their subsequent lives through the events of World War I.

The loss of HMS Hampshire so soon after Jutland has led to many questions. In particular, could the message have been passed on better? Two wireless museums – from Orkney and Burntisland – will come together to look at the communication systems of the time, on sea and shore.

There will be the latest news on the state of the Arctic ice, and stunning photos of the aurora in Arctic lands. There will be insights into possible links of standing stones to ancient comets, and studies of animal teeth giving insights into early Orkney farming.

There will be news of probes below land and sea to reconstruct vanished landscapes – and the people who lived in them. There will be the story of a Spanish cave with a human jawbone over one million years old.

There will also be the latest news of the search for the mysterious Denisovans – the ancient humans whose ghostly traces appeared in a Siberian cave six years ago.

And then there is the physics of golf and the mathematics of the Neolithic, the techniques of building cathedrals and creating Renaissance cosmetics, the art of forming crystals and making giant bubbles, and ways to better broadband and darker skies.

It starts on Thursday 1 September with a North Isles theme, with stories of Egilsay corncrakes of Egilsay and North Ronaldsay bird migrants – plus a lunch of North Isles produce and the launch in a blaze of colour of the Festival’s new upcycling project, Fashion the Future! 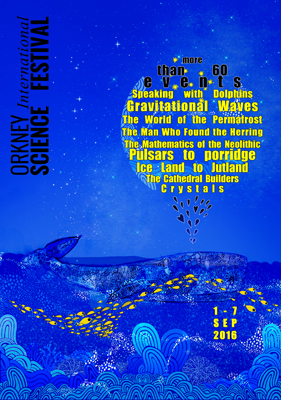