Imagine you are gazing at a 300 foot high wind turbine being raised from its horizontal position at Nigg Bay, Rosshire, up into the sky, to become a mammoth perpendicular structure, with the aid of giant robotic cranes on either side, men in steel helmets beetling around like ants overseeing the whole operation and keeping it safe from disaster.  Once up the beautifully sculptured turbine will be carefully towed to take up its permanent position on a platform in the North Sea.

To record such an engineering feat is the work of internationally acclaimed artist Sue Jane Taylor, famed for her work with the offshore oil industry and her Piper Alpha Memorial Sculpture.  Now she has turned her focus to the renewable energy industry and her latest touring exhibition ‘Beatrice Works’ will be on display at the Tankerness Museum in Kirkwall from Thursday 4 September to Saturday 4 October this year.  Taylor’s exhibition ties in closely with the Orkney Science Festival running from 4 to 10 September with one of its featured events being the unfolding story of the Pentland Firth and its as yet untapped natural forces of wind and wave power.

[dropcap]B[/dropcap]eatrice Works was the world’s first deep-water wind farm project and is situated in the Beatrice Oilfield off the east coast of Caithness. Taylor’s work combines paintings, etchings, drawings and diaries of the ground-breaking project and captures the drama of people and engineering at the cutting edge of the deep-water renewables industry.  A further 270 turbines are planned for the Beatrice site with installation due to start next year.

Taylor calls herself a contemporary landscape artist with a lifetime’s inspiration drawn from the introduction of these awesome structures into the wild environment of offshore Highlands and Islands.  For her there is a ‘raw beauty’ to be found in the towering structures and she records and interprets the combination of technology, engineering and human effort with precision and passion.  She claims that her work is a demonstration of the combination of art and science and that her stunningly beautiful depictions are a celebration of engineering achievement at its highest level.  Taylor adds that such engineering achievements should rank along with those of past giants such as the highways and bridges of Telford and the steamships and railways of Brunel. She asserts she has the rare privilege of recording an important part of our social history in art form as other artists have done before her such as the industrial paintings of L S Lowry and those of war artists in the First and Second World Wars. 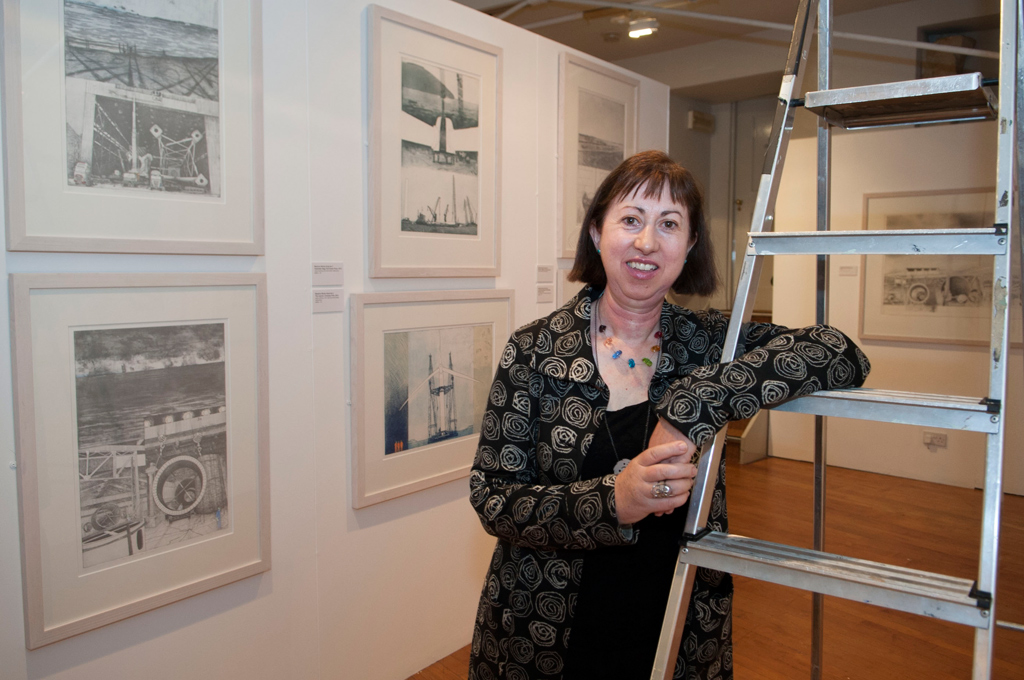 Another aspect of Taylor’s work is that she aims, in art form, to remove people from what she calls their ‘separate boxes’ and treats them as forming part of daily living.  She reminds us that 33,000 people are employed in the off-shore industry and that although such engineering work is often side-lined, we the public are completely dependent on their input for our everyday lives.  A recent trip took her to the Pentland Firth to the Pelamis test sites just off Stomness.  Taylor and a fellow artist travelled by boat hired from Scotmarine Ltd to visit two of the proto-type sites, the Sea Snake and the Penguin.  She admits to being disappointed that the weather on the day was calm adding that, as an artist, she had wanted to see the sites in ‘wild weather’!  The North she says is now ‘the hub’ of off-shore energy development and Taylor will certainly be on the scene to record the unfolding story of the Pentland Firth and its renewables potential as part of her artistic journey.

Taylor says she is looking forward with fondness to the Tankerness Museum Exhibition in Kirkwall this year explaining it was the first museum she visited and loved as a small child.  In her own words she enthuses, ‘I will feel very much at home there.’

A foretaste of Sue Jane Taylor’s Beatrice Works exhibition can be found in a feature by her in Frontiers magazine. And you can meet the artist herself on the morning of the opening, Thursday 4 September, when she will there at Tankerness House from 10.30 am until just before 12 noon.