Astronomers have found what seems to be a planet wandering on its own through space without a parent star. The image above shows an artist’s impression of it.

Planets like the earth orbit the sun, and in recent years various new planets have been found orbiting other stars. But a new object has been found which the discoverers are calling ‘an orphaned world, drifting in the emptiness of space.’

The lonely planet was found by two telescopes working together. One is the Very Large Telescope in Chile operated by the European Southern Observatory (ESO), the other the Canada-France-Hawaii Telescope.

The planet, labelled CFBDSIR2149, is about 100 light-years away from us and seems to be part of a stream of young stars called the AB Doradus Moving Group. These stars are all thought to have formed at the same time, and so if the planet is associated with them, a fuller picture of it can be built up.

Its age would be that of the moving group – 50 to 120 million years. It would be big, with a mass somewhere between four and seven times that of Jupiter; and it would be hot – around 430 degrees C. 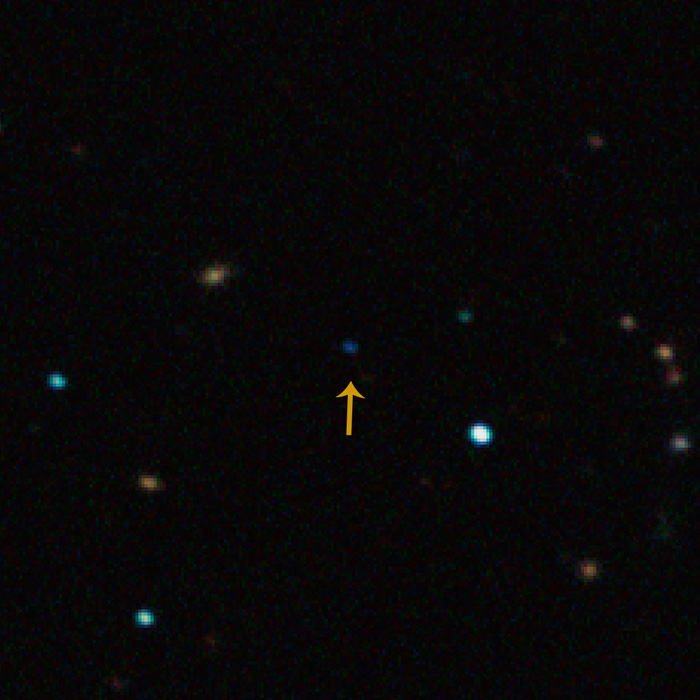 The astronomers have released an image of the planet in the sky. It does not appear as a glowing spot in the sky since there is no parent star to shine light onto it. But its hot surface means that it radiates infrared light, and so it shows up in an infrared scan. It appears as a blue central spot in the photograph, due to absorption of some of the infrared light by the earth’s atmosphere.

Observatory, a partnership of 15 European countries which operates three telescopes in Chile. The Canada-France-Hawaii telescope is operated by the research councils of Canada and France and the University of Hawaii.

The details of the discovery of the new planet are set out in a research paper which appears in the journal Astronomy & Astrophysics today.