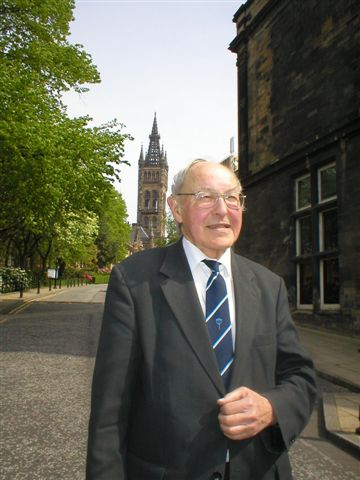 A MEMORIAL SERVICE AND TRIBUTE to the late Professor Archie Roy was held in Glasgow University Chapel on Thursday 14 March.

Archie Roy, who died on December 27th last year, was one of the great figures in Scottish science. His talents spanned a wide range of fields. To astronomers he was a distinguished researcher, on topics from celestial mechanics to archaeoastronomy. To thousands of readers, he was the author of a series of science fiction novels, which blended insight and ideas with adventures in the Scottish landscape. To audiences of all levels, including those in the early Orkney Science Festivals, he was an outstanding lecturer who needed no notes to deliver presentations of great clarity. And to researchers into the paranormal, he was a classic investigator, combining an open-minded respect for the experiences of others with the discipline of the scientific professional.

Archibald Edmiston Roy was born in Yoker, Glasgow, on 24 June 1924. His father was a draftsman at John Brown’s shipyard, and he himself originally wanted to be an architect. But in hospital with TB as a teenager, he could look out at night at the stars through the window of his ward. So began a lifelong love of astronomy. He began reading books on the subject, and from Hillhead High School he went on to take a BSc at Glasgow University, followed by a PhD in 1954.

He went to teach science at Shawlands Academy, using the school holidays to continue his university research. In 1958 an academic post became available and he applied, despite being back in hospital, this time with a slipped disc which had rendered him immobile. But with characteristic determination, he made it to the interview; and an academic career followed. He became senior lecturer in 1966, reader in 1973, and a professor in 1977.

He wrote textbooks, and over 70 scientific papers, on topics from celestial mechanics to archaeoastronomy. The International Astronomical Union honoured him by naming an inner main-belt asteroid Archieroy, shortly after its discovery in 1986.

In the 1960s he was a consultant to NASA when it was working on the mission to the moon. He had long been convinced that a manned moon landing was possible, to the extent that in 1964 he had laid a bet with the bookmakers William Hill that there would be a man on the moon by 1971. The odds that he was given were generous, and when Neil Armstrong took his giant leap in 1969 he earned Archie Roy a cheque for £1200 which was presented on TV.

‘A Sense of Something Strange’

His interest in the paranormal developed by sheer chance, as he explained in his later years. “I lost my way in the old university library and found shelves of books on spiritualism and psychic research,” he said. “My first ignorant reaction was ‘What is this rubbish doing in a university library?’ But curiosity made me open some of the books. I was surprised to recognize some of the authors of this ‘rubbish’, such as Sir Oliver Lodge, Professor William James, Professor Sir William Crookes, and so on. My balloon of ignorance was punctured by the needle of my scientific curiosity and I found myself called up to a new career.”

His investigations took him to many unusual settings, and the Glasgow University switchboard staff were used to receiving unusual inquiries and routing them to him – from people living in haunted houses and from families plagued by poltergeists. He was the ideal investigator, as people relaxed in his presence and confided in him, while his systematic and disciplined approach provided a critical scrutiny of every detail. He had a wealth of stories to tell about his investigations over a period of 30 years.

“They often originated as cries for help from people convinced that they or their homes were haunted,” he said. “Some cases were found to be non-paranormal, for instance as imaginative misinterpretations of unusual noises – the peremptory knocking of a water-hammer, or sadly, mental trouble. But some did involve paranormal phenomena. Some were poltergeist cases, others were apparitional and some were mixed. In some we found evidence of intrusion from the other side of death, of ‘unfinished business’, of maliciousness, of a wish to dominate. In some we could identify the problem and even take measures to solve it, operating not so much as psychical researchers but more akin to psychical plumbers! Hopefully we learned from every case but our prime concern in each was to help the unhappy family who called us in.”

In one case, a voice that spoke to him through a medium seemed to be that of a scientist, welcoming him and saying that he himself had carried out in his own lifetime some of the pioneering work of calculating periodic orbits of planets and satellites.

“He discussed with me some of the technicalities and difficulties he had experienced and referred to the fact that in his day there were no computers such as I could now use. Afterwards I realised that there were only about a score of people in the UK who would have been able to have a conversation with me at that level of expertise on that subject. And as far as I know, the mediums had not been given my identity and profession. I also realised that the scientist bore quite a resemblance to George Darwin, related to Charles Darwin, who had indeed carried out such pioneering calculations on periodic orbits.”

‘Fascinated by life in general’

He and his wife Frances had three sons – Dr Archie W N Roy, Ian Roy and David Roy; and David Roy’s words sum up so well the talents of a man who encapsulated the very best of Scottish science and Scottish character:

“My father was a man of the Scottish Enlightenment, equally proud of his achievements in academia, novel writing and psychical research.

“Of all his achievements and awards, he still introduced himself simply as ‘a teacher’ and thought education was the key to a just and equal world. Born into a Clydebank room and kitchen, he epitomised all that a ‘free’ public education can do.

“He will be greatly missed by his friends, colleagues and family but his work and writing is still with us. His two grandchildren David and Fraser already are interested in being astronomers and writing novels. He has inspired many, influenced multitudes but was my dad and I loved him.”