He is renowned as a session drummer and is proud to have learned the basic drum rudiments with Wick Pipe Band at the age of fourteen and to have played in various Caithness dance bands (including Eileen and the Talismen) during the 1960s.

When Andy was 16 he won the North of Scotland song writing competition and has continued to write songs and perform as a folk/blues singer guitarist ever since. On ‘The A9 to Wick’ (a parody of Bobby Troup’s ‘Route 66’ written in 1946) he plays blues guitar and harmonica in a foot-stomping tribute to the road that ‘goes from Stirling to Sinclair Bay, More than two hundred miles all the way.’

For Andy himself, there is a family connection, as his late father, William Munro, was the roads civil engineer for the upgrading of the Causeymire road from Latheron to Georgemas Junction in the 1960s and Andy says that he is sure that his father would be pleased to know that this route was re-designated in recent years as the A9.

Come to the Festival

Mr Boom’s new CD is special in two ways. First of all, he’s brought it out especially for the Festival, and is indeed calls it ‘Come to the Festival’.
And secondly, he features a particularly close friend – Andy Munro. It is true to say that the two could be termed inseparable. Wherever Mr Boom goes, Andy is there. 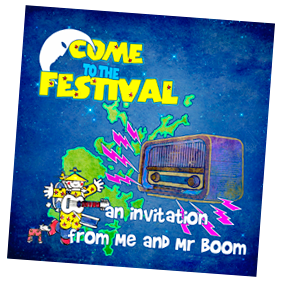 The new CD includes songs written Andy, and some written by Orkney Science Festival director Howie Firth. Andy’s daughter Flora accompanies him on one of these songs – about one of Scotland’s greatest scientists, James Clerk Maxwell.

We have a copy of the lyrics of the songs on the new CD, which you can download.  The file is quite large, so it may take 20 seconds or so for the download to be completed. CLICK HERE FOR A COPY OF THE LYRICS