In the 1960s the tide in physics flowed towards tackling the strong interactions, as those grappling with the weak interactions had come up against an apparently unshiftable block.

The technique that seemed to be the most powerful one was the use of symmetry, and the use of Lie groups enabled a classification to be made that brought the weak interaction into a possible unification with the electromagnetic one. That was truly amazing. The long-distance electromagnetic field that gives us light and radio waves was somehow linked at a deep level with the weak interaction which we only know through its by-products in processes at the quantum level like radioactive decay.

A second application of the treatment involved another type of symmetry, gauge symmetry, which required the existence of a new type of field, the Yang-Mills-Shaw field, which brought the weak interactions even closer, by giving them a new particle of their own to complement the electromagnetic one (the photon).

But – damn and blast – the predicted ‘weak photon’ was massless, which could not be the case in reality. And – damn and blast three times over – Goldstone’s theorem showed that there was no way in which you could generate a mass-possessing weak particle without destroying the symmetry completely.

For those few people who refused to abandon the problem, if they had any request from Father Christmas it would be for a symmetry-breaking kit – something that would break the symmetry while preserving it.

The situation required the kind of ingenuity of an Orcadian student from Birsay who had happily stuck photos of his native islands on the wall of his Edinburgh digs with Copydex, which at the time was regarded as proof against just about anything – a problem which his landlady encountered when she decided that the pictures infringed the rules of the house. She tried to haul them off the wall and took off a quantity of wallpaper with them, and irately confronted him for his misdeeds. Without the slightest appearance of a pause for thought, he said with a kind of calm authority: ‘Oh, what a pity that you didn’t ask me for the Copydex remover.’

Something this was needed with the electroweak interaction – to remove some of the picture-equivalents off the wall without at the same time taking the wallpaper with them.

The equivalent of the Copydex remover came indeed not from looking at a wall but from things that are much bigger and solider than the world of very small particles. There were three situations in solid state physics that produced the clues.

When atoms join up to form a crystal, their outer electrons loosen and begin to drift. Having lost these outer electrons, the previously electrically-neutral atoms have a net positive charge. The electrons stay in the crystal, not attached to any particular atom, and an electric field can start them moving in a particular direction – this is what forms an electric current. However, the effect of the positive lattice with the little pulls of the various atoms in the structure can be to slow down the electrons – and make them appear to be more sluggish and massive than they would otherwise have been.

So one way for a particle to behave as if it has more mass is to put it in some kind of external lattice like this.

A magnetic substance is formed out of many little units which are themselves magnetic – they are called domains. When the substance is very hot, the domains will move around and point in a random mix of ways and from the outside we would never know that there was the potential for magnetism there. But if we let the temperature drop, there comes a point where suddenly the domains click together into pointing in a single direction. Somehow each lines up with its neighbour, but not in a one-by-one fashion but all an overall ‘decision’. We have no way of knowing in advance which direction they will happen to lie along.

The reason why they line up in this way is because this is the most stable form they can take. It is as if they have dropped down to the lowest point they can reach. It is a bit analogous to us filling a jar with sugar and tapping it from time to time – to see the level sink as the sugar grains start to fit together better and better. In the case of the magnetic substance, there is no tapping process, and the alignment happens almost in an instant. But there is a parallel in that in each case the little units – whether domains or grains – ‘find’ that by aligning themselves closely a stable ground-state is reached.

The magnetic substance when it was hot was very symmetric in that we could turn it around in as many ways as we would like, and in terms of magnetism each direction looked the same. But after we cooled it, we had this sudden transition of the domains into an overall direction. So the individual units still retained their own internal symmetry while the collective result was to make a break.

This is in a very strange world, the interior of a superconductor. Here electrons can travel through the crystal lattice so smoothly that nothing slows them down in any way and they can travel forever. Here something has happened which is a kind of parallel to the magnet in that there has been a process of internal ordering. The electrons have a kind of overall link between them that enables them to get through the lattice without bumping into any of the lattice atoms.

It is a bit like dancing the conga. If a group of people are in a crowded room and all try to make for the door on their own, their will be a lot of bumping into others and an ever-slowing rate of progress, but if they line up in conga formation they can negotiate their way round in a coordinated way and avoid touching anyone.

So we need an additional field to interact with the field that we already have, in particular the Yang-Mills field.

But how will this field get round the constraints of Goldstone’s theorem? – which the Yang-Mills field on its own could not get beyond.

Here is where situations 2 and 3 come in. This new background field has to have the various symmetries, otherwise we have broken them completely, but since it is a brand-new field with only one task, to help us out of our problem, we do not need to allow it to have all the myriad of options that the more familiar fields do. Indeed, it only requires to have one option, just like the magnetic bar does, and just like the electrons in the superconductor do. There is one single position that the choice of options locks in to – so to that extent it has broken the symmetry – but the break is not so bad that we have lost the symmetry completely. 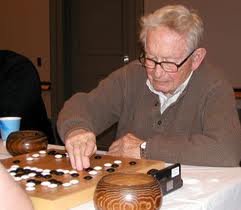 In 1963 Philip Anderson looked closely at what happens inside a superconductor and said that there was something important for particle physicists to be aware of. Anderson was a specialist in the solid state, and went on to share the Nobel Prize in 1977 for his work on the electron interactions in phenomena like magnetism and superconductivity. His studies at Harvard had been interrupted by the war, in which he had been deployed in research on building radio antennas, and after going back to Harvard to complete his training (and where his fellow-students included Tom Lehrer) he went to work at Bell Laboratories, joining a glittering array of researchers there. He found that the sophisticated mathematical techniques of quantum field theory that he had learned from Schwinger at Harvard had practical applications in the advanced radio work. In his background there are professors on both sides of the family, together with a love of the outdoors, and from a sabbatical year in Japan there is a deep interest in Japanese culture and he is a first-degree master of the game of Go.

The paper that Philip Anderson wrote in 1963 showed that in a superconductor the ordered cloud of electrons acts like a single quantum system which can be energised, and that the bursts of energy look like particles. The presence of an electromagnetic field affects these excitations in a way that makes them behave as if they had acquired a mass. So, he noted, symmetry was being broken but yet mass was being generated, and so the blocking effect of Goldstone’s theorem had been overcome. The Goldstone difficulty was, he said – ‘not a serious one’. It was this paper that opened the way for the breakthrough of Peter Higgs.